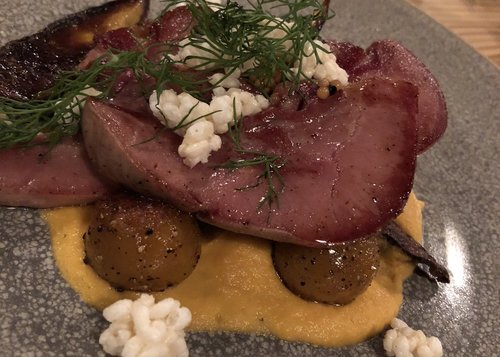 Former Republic Tavern and Parks & Rec Diner executive chef Sarah Welch's new restaurant is a hit — both for the marrow dish for which it's named, and for other animal parts that might make the traditional diner squeamish, the latest Metro Times food review says.

Restaurant critic Tom Perkins — a fearless food adventurer who has devoured kidneys and crickets in his line of work — advises diners to exit their comfort zones at the West Village eatery.

Some American palates may struggle with the idea of squishy tongue, but the flavor is more familiar than it would seem, even if what arrives is indeed a plate full of tongues. Marrow chef Sarah Welch appreciates the underappreciated parts of the animal that are often treated as waste, and she works well with them.

Also a winner, Perkins writes, is the raw beef — but consider BYOB-ing some regular chips to put on the side:

In the beef tartare, a red-pink patty of coarsely minced Graham Farm organic beef (Marrow buys from Graham's small herd of about 40 cows) is studded with local mushrooms, black olives, and Chinese chives that, along with a deep yellow dollop of yolk curd, makes it some of the heartier tartare in town. The beef is covered in microgreens and served with salt and vinegar chips — an interesting idea, but the chips dominated the meat's flavor to the point that I preferred bites without them.