Don't Erase Us: Blunt Talk for New Detroiters from Two Women Who Stayed

Beverly Frederick and Marsha Battle Philpot (aka Marsha Music) suggested that recent arrivals go beyond their social zones to respect and learn from keepers of our city's heritage.

"There's a new birth of urban humanity that is happening here. . . Can we do this? Can we live together?" Philpot asked at the two-hour Cultural Center event, billed as an evening of "Urban Wisdom" for "next-generation city builders." It's part of a "Parlor Talk" series hosted by Urban Consulate, a two-year-old program that presents forums, dinners, book clubs and other gathgerings in Detroit, Philadelphia and New Orleans "to bring people together and share ideas for better cities."

Philpot is a writer, historian and frequent public speaker who describes herself as "a primordial Detroiter" and as "a Detroitist." She's a past winner of a Kresge Literary Arts Fellowship, a Knight Arts Challenge award and an Ideas City Detroit Fellowship.

Frederick is a 2018-19 Detroit Innovation Fellow and block captain in the North Rosedale Park Improvement Association.

Their free presentation was promoted as "a conversation with tried and true Detroiters who have remained steadfast to the city and engaged in their neighborhoods through thick and thin."

Excerpts below, consolidated from live tweets by Urban Consulate, are not a full transcript. Though speakers alternated their comments, conversation-style, each woman's remarks are presented separately for coherence. (We didn't attend.)

'Detroit never left. You did.
Welcome back!
' -- Marsha Music 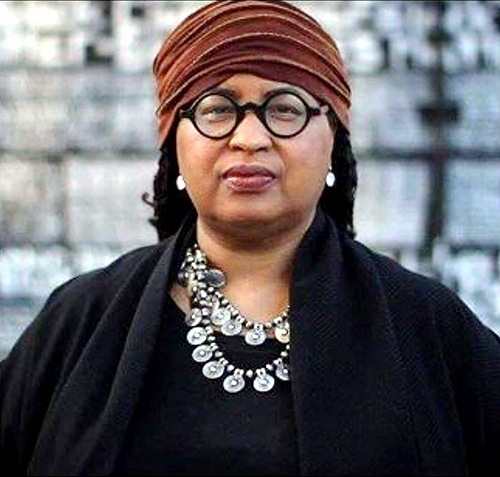 Marsha Music: "Detroiters were erased from the story of the city." (Photo from Urban Consulate)

This is not a gathering to harangue new people in the city. That's not what I do.

I start out from the supposition that everyone in this room wants to live in this city, with black people. If you don't already live here, you're considering.

You're not people who have created enclaves in the city where black people are not welcome. You are not those people. I'm going to make that assumption. And if you find yourself amongst those people, you know there's something ain't right.

I truly believe there is hope in this city for those of us who have determined we want to live together.

I am very concerned about how Detroit came to be perceived by new people moving into the neighborhoods. In the historical canon, Detroiters were erased from the story of the city.

I've set about to not whine about it, but to do something about it—making sure there is an accurate picture. A lot of this does consist of talking to newcomers about how they portray this city. I felt a calling to affect the narrative of this city.

Detroit is complex in its history and its composition. It’s a city of nations. People from all over the world gathered here.

I wrote a poem, "Just Say Hi." It’s my mantra, and my admonishment. I was noticing so often, elders would say: "They don’t even speak." And it was said with such pain, such consternation, that new people did not acknowledge their presence.

We have a profound problem with invisibility. We need to acknowledge each other.

Detroit never left -- you did. Welcome back!

Young white people who move into neighborhoods are often surprised how much support they receive. For elders, they remember: when they moved in, white people left. I want you all to think about how that felt to some of your neighbors.

People have been struggling and holding on for so long, just wanting order. And then young people come along and want bacchanals. There is a need to have an open heart about what has happened in these neighborhoods.

► Question from moderator Orlando Bailey: What does "tried and true, through thick and thin" mean for you?

People have been through the valley of the shadow of death. Neighborhoods have been shellshocked by economic and social reversals. People think Detroiters are hopeless—but no. You couldn’t live in an environment like that without hope.

► Question: What advice do you have for city builders?

Try to be aware of [not] having events that are difficult for seniors to access. Getting up steps is a significant challenge.

I am humbled by the earnestness, energy and desire of young people to do something to make a difference. That is gratifying to me.

Go to events that black elders give. Particularly jazz events, church events. They are amazing, you will learn more about people if you attend. I see virtually no young white people. But I thought you all loved Detroit so much? Where y’at?

► Question from moderator: We’re living in an era of fallback culture. When we're tired of something, we give it up, move onto the next. We like things to happen quickly. What advice do you have to stay in it for the long run?

We can't continually be pressed to this work every moment, because you can't sustain.

I had a period of years where I wasn't active, I just gathered myself. At the same time, you have to continually teach people to come along with you.

► Question: What tools do you need toi help your community?

You need a willingness to sacrifice personal time. I get asked to speak a lot. Like I have a standing invitation to talk with young Jewish kids who come from the suburbs, so they can understand they have an important connection to the city.

[Another] great tool is constant observation. Listening, looking, watching the city. I don’t drive freeways. It forces me to drive the streets, and I watch what's going on in the neighborhoods.

One tool you need is friendliness. I'm very blessed to have a friendly spirit. And to love people. I like listening to people's stories. And I love telling stories! That’s a gift, too.

We’ve been victims of a cruelty that has kept us divided. There is a difference between blame and responsibility.

There's a new birth of urban humanity that is happening here. It's not just people moving around, it's a reconfiguration of humanity. It’s a certain social and spiritual experience: Can we do this? Can we live together?

Those of you who are blessed enough to be here in the city at this juncture, this is an amazing time. It’s a time of extreme flux and dynamism, what’s happening here. People should pay attention. Write about it.

How many people here are newer to the city? Have you ever been welcomed to the city of Detroit?

I’m going to say it: Welcome to this magnificent place. It’s a cauldron of wonderfulness

'The city of Detroit needs
a lot of warriors' -- Beverly Frederick 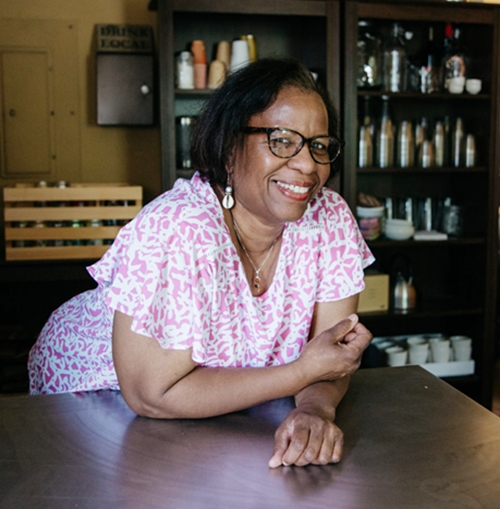 Beverly Frederick: "I carry the weight of all the African-Americans in my community." (Photo from Detroit Innovation Fellows)

► Question from moderator Orlando Bailey: What does "tried and true, through thick and thin" mean for you?

It looks like others coming along on the journey with me. I've had seniors, young people, all walks of life, come to help. It makes a difference.

It's disheartening when you try so hard, and someone comes behind you, and they don’t want to do right by the community. It makes you a warrior.

The city of Detroit needs a lot of warriors. If I was 20 years younger, I would take care of more areas than just my own.

► Question: What advice do you have for city builders?

If you promise to do something, stick to it. Follow through.

If you feel like you can't do something anymore, give it a day. Then keep going. People will come out of the woodwork to help you.

Young people's attention spans are very short, there's so much going on in their lives. I dedicated my life to [neighborhood work] after I came out of working in corporate America, to give back to the community that gave so much to me.

Longevity is key. Unless you have a collective group of all ages, people will drop out. I'm here to see it all the way through.

► Question from moderator: We’re living in an era of fallback culture. When we're tired of something, we give it up, move onto the next. We like things to happen quickly. What advice do you have to stay in it for the long run?

I embrace the winter, for the [outdoor] work I do. When winter comes, it’s like ahhhh. So find your winter! That will keep you sustained.

► Question: What tools do you need to help your community?

Be kind to people. You'll be surprised that people will help you. That's been my journey with the city . . . just connecting with people.

Expose kids. Don’t shy away from showing good and bad. Maybe when they reach the age, they can help, they'll remember.

My grandson doesn't live in the city, he's in the suburbs. I drive through areas that are in need so he can understand.

I try to embrace people where they are, no matter their walk of life or color of skin. But that’s a long lesson learned, it comes with living.

I think it's easy to make assumptions. I just want you to get to know your neighbors.