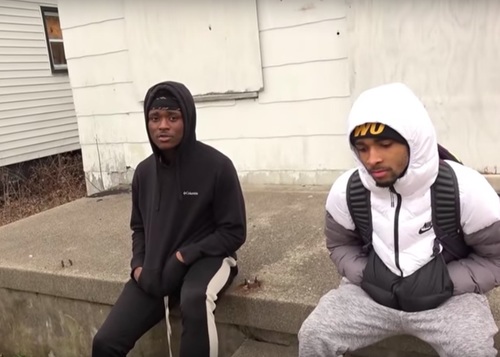 Life on Detroit’s west side, near Plymouth Road and the Southfield Freeway, is so dangerous that, to some, a war metaphor is apt.

“It’s the trenches,” a young man says from the stoop of a vacant house.

So begins a new video interview shedding light on the struggles of some residents in the area.

From their vantage point on Memorial Street off Plymouth, the young man and his "cousin" go on to describe the unimaginable circumstances they’ve faced growing up in the neighborhood. The cousin says that when he was a year old, his father was killed while robbing a business. When he was 11, he watched a close friend die in a gunfight.

The 13-minute video, posted to YouTube and titled "Detroit’s Worst West Side Hood," is one in a series by user CharlieBo313 that chronicles life in inner cities across the country. But the man behind camera, Charlie Moore, is a native Detroiter, and, as such, knows enough about the changing city to ask the young men some pointed questions about whether a purported renaissance has benefited them.

The young man whose dad was killed is unequivocal in his response:

“They aint doing nothing for real, they worry about the wrong shit,” he says. “They want to invest in parts of the city where they don’t need no investing, where they kids is good, where their parents already got money for their kids' tuition.”

But what of the tearing down of abandoned houses, and the street lights coming on, Moore asks.

The man whose dad was killed grew up in an area known as “the dark side of Plymouth,” past Greenfield. Both men say there are still no street lights over there. The other lives on “the light side,” where there are street lights, but suggests it hasn’t made a difference.

“You better have a glicky on you, a Glock or somethin',” says one of the men.

“You gotta know how to move out here, these streets cold, for real,” says the other.

Moore has more than 200 videos on his YouTube channel that offer a glimpse into life in Detroit's neighborhoods. To help him compile more content, you can donate to his Paypal here.