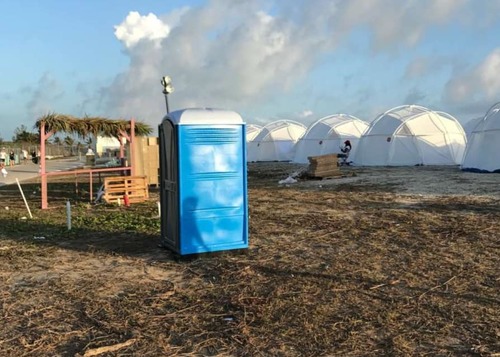 Just as the Fyre Fest had to find a new location after it was booted off Pablo Escobar's former island, the imitation event planned for Belle Isle is too looking for a new home.

On Tuesday, the woman spearheading the event updated  its location on Facebook to "Hamtramck Island" with details still "TBD."

"The Department of Natural Resources does not want us," she wrote. "So we are going to bring the party to the party Island of Hamtramck instead!"

Ends up two documentaries weren't enough for some Detroiters intrigued by the failed Fyre Festival of 2017. Hundreds apparently hope to come close to experiencing the nightmare, and are planning to join in a reenactment of sorts on Belle Isle.

Nearly 6,000 Facebook users are interested in attending the Fyre Fest Live Action Role Play scheduled to take place at the island park April 28. The event is being put on by Harsh Tokes Booking, which describes itself as a Hamtramck-based "entertainment booking thing."

For the uninitiated: LARPing, according to Wikipedia, is a "role-playing game where the participants physically portray their characters. The players pursue goals within a fictional setting represented by the real world while interacting with each other in character." Think Dungeons & Dragons.

For the uber-uninitiated: Fyre Festival was supposed to be a luxury music event in the Bahamas, but the young rich guy running it squandered millions on promotion and was left to put on a budget event with FEMA tents for lodging, no live music and, reportedly, no food. The festival was canceled only after ticketholders began to arrive on the island. The young rich guy, Billy McFarland, has been sentenced to prison. A $100 million class action lawsuit has been filed against him and other festival organizers including Ja Rule.

Whether the Detroit LARP is an actual event or a meta hoax is TBD. So are event details.