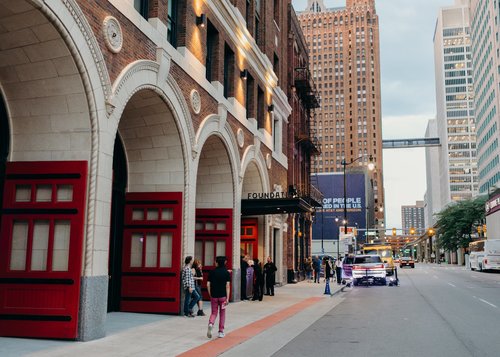 Update: 9:22 p.m. Wednesday: The Foundation Hotel issued a statement this evening in response to a lawsuit filed by a former HR staffer alleging "rampant racism" at the hotel:

“Management takes the allegations seriously. Foundation Hotel is an equal opportunity employer and works to create a dynamic environment for all employees and guests. While we are in active litigation, we can say we deny the allegations in this lawsuit.”

Jaw-dropping allegations of racism out of downtown Detroit's swanky Foundation Hotel. A former human resources coordinator has sued the Larned Street establishment, saying executives selected staff based on skin color and kept black employees out of a work party for being “too dirty."

The allegations are detailed in a federal suit filed Tuesday and covered by the Detroit News.

Before you read the allegations in detail, we offer this contextual reminder: This is a high-end hotel patronized and staffed primarily by white people in a majority-black city.

Now, on with the allegations from HR coordinator Twana Simmons:

The Detroit resident said she had a "bird's eye view of the rampant racism" among supervisors at the hotel, which opened to fanfare in a converted firehouse May 2017 across Washington Boulevard from Cobo Center.

"Ultimately, because of her efforts to stop racism within Detroit Foundation Hotel, (Simmons) was fired," her lawyer Richard Mack wrote in the lawsuit.

The Foundation Hotel did not respond to the News' request for comment.

The suit does give a glimpse into how higher-ups may have felt about allegations of racism, however. The News reports that when Simmons called her superior out for her judgment, she allegedly became agitated, responding that she "dates black guys" and "hates when people say the company is racist."