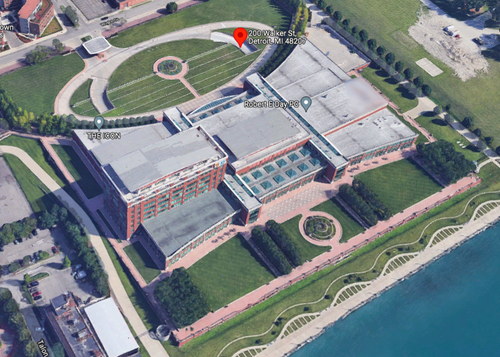 Crain's reports on the sale for an undisclosed price:

The 420,000-square-foot UAW-GM building sits on 18 acres and has 880 parking spaces, while the former Stroh family portfolio purchase (which occurred in two phases) earlier this year gave Gilbert a little over 8.7 acres of developable land, the rights to 735 parking spaces and the roughly 500,000-square-foot Stroh River Place office building, which is approximately half occupied.

"We spent quite a bit of time looking at a variety of opportunities on the riverfront, and we've added to some of our assets," Kofi Bonner, CEO of Gilbert's Bedrock LLC real estate company, said in an interview with Crain's. "When this became available, it seemed like the right thing to do because of its size, candidly, and its adjacencies to the Stroh riverfront portfolio, which meant that with the right amount of creativity and following good urban design principles, we could potentially connect those two."

Gilbert reportedly bought the building from developers Dominic Moceri and Christos Moisides, who paid $34 million for it just a year ago.