'A gem waiting to happen:' Empty Detroit auto plant to go from 'crumbling symbol' to rebirth

A haunting eyesore from a bygone era -- the abandoned Fisher Body Plant near where I-75 and I-94 intersect -- will be revived as apartments and commercial space.

Two local developers, Gregory Jackson of Jackson Asset Management and Richard Hosey of Hosey Development, plan to rehabilitate the hulking structure. "This project is proof of the potential of Detroit, its spirit and its people," a city social media post quotes Jackson as saying.

Detroit News coverage calls it "a crumbling symbol of the city's industrial decline and decay" and says:

The $134-million project, which city officials believe is the largest African American-led project in Detroit's history, could add momentum to the city's efforts to build an economic future from the ruins of its automotive past. ...

Jackson's vision calls for 433 studio, one and two-bedroom apartments atop 28,000 square feet of commercial space and 15,000 square feet of co-working space in a complex dubbed the Fisher 21 Lofts. ... The developers and city officials hope for construction to start next year and be completed in 2025.

One-fifth the apartments (87 units) will be reserved as affordable housing at below-market rental rates. 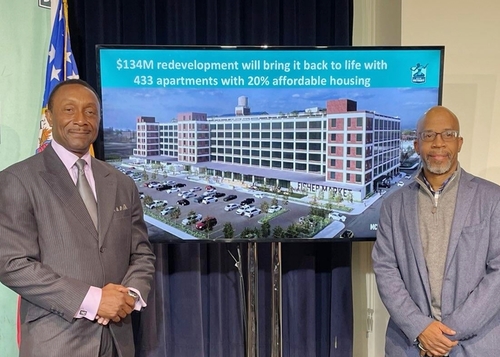 The GM plant was open from 1919-84. "This building is more than stable, more than capable," the paper quotes Jackson as saying. "It is rock-solid and ready for redevelopment."

The project is pending City Council approval of the sale. [Mayor Mike] Duggan said he expects the purchase price to be under $1 million. Hosey and Jackson said they hope to close on the sale of the property in early summer. ...

"We know it's viable," Hosey said. "More than that, we know instead of being impossible, it's actually a gem waiting to happen." ...

"This facility serves as a vital connector between what is known as the north end of Detroit and Institute of Arts area of Detroit, Midtown, that whole area," Jackson said. "It's sitting there waiting to be connected to the rest of that."

He and Anika Jackson Odegbo are the father-daughter team behind Jackson Asset Management.