It took a while, but Belgian feather bowling has found a home outside of Detroit's east side. And while we don't like to dust off the meaningless "hipster" label again, it really could only be in one place -- Brooklyn. 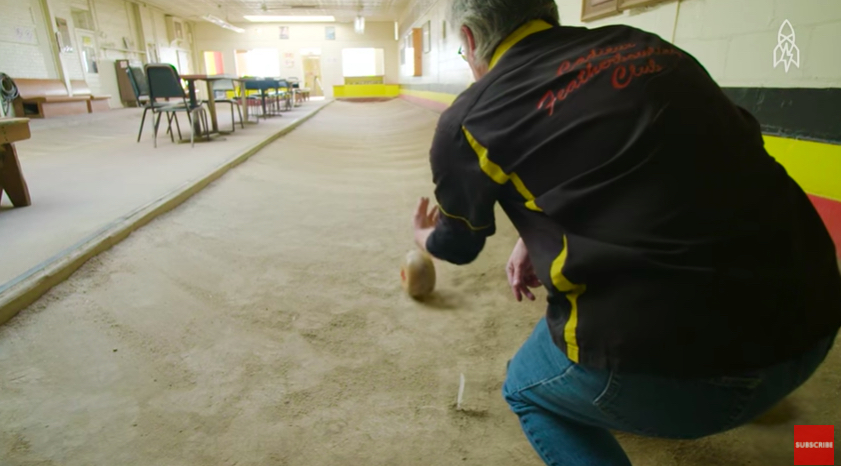 New York magazine's Grub Street vertical introduces its readers to "the most obscure sport in North America," which recently found a home at Randolph Beer, in Brooklyn's Dumbo neighborhood of New York City.

From the photos, Brooklyn's feather bowling looks like a much cleaner version of the game played every night at Cadieux Cafe here in Detroit. The lanes are carpeted in artificial turf, not the well-packed dirt of the Cadieux (said to be well-seasoned with pigeonnblood). The balls look brand-new and varnished. And the feather isn't from the common pigeon, but is a bright white ostrich plume.

Still, the story pays tribute to the O.G.:

Since there are no official schematics, (Randolph Beer owner Dave) Plate and his team reverse engineered the court design from photos and videos they found on the internet, most of which came from the mecca of feather bowling in America: the Cadieux Cafe in Detroit, which has operated authentic courts in the U.S. since its founding in 1933 and still boasts what is easily this country’s liveliest feather-bowling scene. Plate made his own pilgrimage to Detroit in October 2021 to see the game firsthand and returned to New York with tips and advice from the Cadieux team.

OK, then. Looks like Plate learned the most important lesson, which players at his soft launch caught onto right away:

“I don’t think we’re playing it right, but it’s fun!” one trio admitted, discovering different tactics and strategies on the fly. One feather-bowling newcomer named Tess thought it was best to point her feet directly at the opposing feather when she rolled. Will perfected the form of his finger roll (“Very soft — you don’t want to overthrow it”), and Maggie advised taking advantage of the curve of the court: “It has to swerve. You can’t throw it straight.”