Kid Rock fans can pay to 'sniff the sheets' at his former Detroit home, owner says 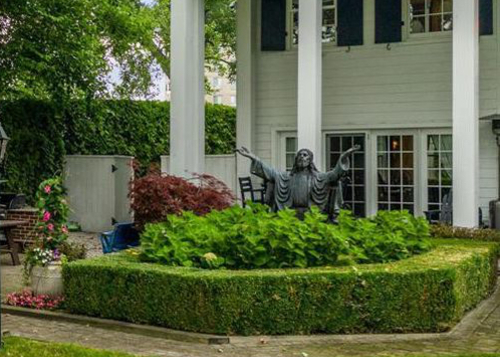 We thank you Father for yet another opportunity to share this pic of the Jesus statue Kid Rock had popping out the bushes.

Kid Rock's old mansion on the Detroit River has remained so well-preserved since his 2019 departure that its newest owner thinks she may be able to cash in with fan events.

Amy Trahey tells Crain's she plans to use the $2-million property as a summer home and market it for events. That includes those that may appeal to fans of the bellicose rap-rocker, because, as Crain's reports, he "seems to have left without so much as cleaning out the refrigerator first."

"There's salt and pepper and liquor everywhere," Trahey said. Kid Rock had a partnership with Jim Beam bourbon and left "a refrigerator full of stuff," Trahey said, along with massive amounts of his Badass beer.

"I can do curated events for fans only," she said. "I think they'd like to sniff the sheets."

Matt O'Laughlin, a Realtor ... who sold Trahey the property, said it was as if "Kid Rock grabbed his underwear and shirts and just took off."

As for the furnishings, "it's still very much Kid Rock."

That includes photos and album covers from his career, as well as a dining room table customized with an eagle and "American Badass," gold-plated signs near the toilets imploring people to only flush tissues and monogrammed pillows on the bed.

The house is on the same block as mayor's mansion. Trahey bought it from an LLC registered to a Grosse Pointe resident who reportedly left the house as-is. Kid Rock bought the home in 2012 for $300,000, property records show.