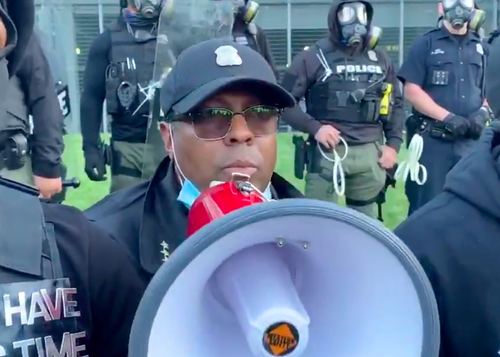 Bettison before taking a knee with demonstrators in 2020.

The 27-year department veteran was named deputy mayor by Detroit Mayor Mike Duggan Wednesday. He replaces Conrad Mallett, who recently became the city's top lawyer, and "will oversee all enforcement-related activities in the city, from police to blight enforcement and more," a media release said.

Duggan says he selected Bettison for his "ability to work with community groups across the political spectrum" as the former leader of the department's Neighborhood Police Officers' programs.

Bettison, according to the release, was one of the department's "fastest rising members," becoming a sergeant, lieutenant, inspector and captain all within about a decade of joining the force.

A 2007 drunken driving charge stemming from an incident in which he crashed a squad car did not slow his rise. Bettison, who was a commander and off duty at the time, pleaded no contest. He allegedly had a blood alcohol level of .22 and was riding with several empty wine coolers, according to a lawsuit filed over the incident.

The department official was close at the time with then-mayor Kwame Kilpatrick, and at one point ran a Political Action Committee that gave $25,000 to his re-election campaign. The PAC was in violation of state guidelines for political spending.

Bettison was last year promoted to the number two spot in the department by Chief James White. He made headlines in 2020 for kneeling with demonstrators following the murder of George Floyd, in a kumbaya moment closely followed by violence. He later teared up recalling how things devolved, saying his "heart was heavy because" he "didn't accomplish" what he'd hoped.